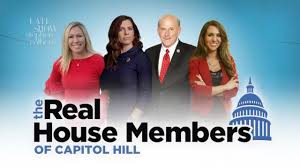 I have tried to refrain from touching on any of the plethora of preposterously stupid things that have come out the engorged pie holes of either Marjorie “I Validate Blonde Stereotypes” Taylor Greene or Lauren “I Make $ Peddling Islamaphobia” Boebert, tried not to give any oxygen to the putrid, hobo-infested dumpster fire that is each of their political careers.  I have told myself to just ignore it, that hopefully they will both go away in twelve short (or not so short) months from now and scurry back into the primordial ooze from which they originally slunk.  Yes, I tried valiantly to look the other way, but the recent manure that came spilling out of Greene’s mouth left me no choice.  I could no longer sit idly by and endure the stupid.

If you haven’t read Greene’s most recent comments criticizing basic Covid protocols, let me remind you that the following came in the form of a tweet.  This is not something taken out of context.  This is not some offhand remark.  This is a written format that she had, in theory at least, the time to think about and craft before she distributed her “ideas” to the world.  This isn’t just some crazy shit she made up on the spot.  This is crazy shit she actually “thought” about and decided to publish for all the world to see.  The tweet is as follows:

The country has never once shut down.

Not a single school has closed.

And every year, over 600,000 people, of all ages and all races will continue to die from cancer.

Oh where o where do I begin?  First, if you are going to use a numerical ordering system for organizing your complex ideas, you might want to number  (or sub-categorize) the remainder of your mindless meanderings.  But ok, let’s overlook such mundane trivialities, shall we?  And let’s dig into the more obviously stunning revelation that this woman, this Representative to the Congress of the United Fucking States, cannot discern between air-borne contagions and chronic non-transmissible medical conditions.  And right now every single one of you is asking the same damn thing, “How in hell did this woman get elected to Congress?”

The sad part is that this is far from the only stupid thing this woman has said.  Let’s review a few of the highlights.  Greene suggested that the Las Vegas shooting was staged.  She speculated that the California wildfires were started by Jewish space lasers.  Greene said that Democratic Reps. Ilhan Omar of Minnesota and Rashida Tlaib of Michigan, “should go back to the Middle East,”  even though Tlaib was born in Detroit and Omar was born in Somalia (which I guess you could consider the “Middle East” if you were standing in the middle of Africa) and came to the U.S. when she was 12.  She has supported Qanon theories, including the notion that 9/11 was a hoax by questioning, “It’s odd, there’s never any evidence shown for a plane in the Pentagon.”  And though it was Donald Trump that tried to start an insurrection of our nation’s Capitol, she has called Nancy Pelosi a traitor and called for her to get the death penalty, “And it’s, uh, it’s a crime punishable by death is what treason is. Nancy Pelosi is guilty of treason.”  Oh, Marjorie, please don’t use words you don’t understand, because you, my sweet, little brain child are straight out guilty of stupid, and though that may not be punishable by death per se, it should be.

But don’t worry about poor Marjorie Taylor Greene feeling all alone up there on Capitol Hill; she has a Tweedle Dee to her Tweedle Dum: Lauren Boebert from my own adopted state of Colorado.  Yeah, I’m not proud of that one, but this hair metal groupie turned Congressional representative has also been ramping up the xenophobia much to the delight of her adoring, mouth-breathings fans.  In fact, Boebert is so mind-numbingly dumb that comedian and late-night host Jimmy Kimmel recently featured a bit entitled “In Real Life or Saturday Night Live” where they took actual video clips posted on Boebert’s own website and showed them to random people on the street, telling them that the videos were actually SNL parodies of her and asking these folks if SNL had gone too far in making fun of her.  Again, these were not off the cuff remarks during a press briefing; these were HER videos that SHE filmed and posted.  Amongst the thought-deprived ramblings Boebert had posted were these beauties:

“We need to have a full investigation into just how many puppies were eaten alive under Fauci’s watch.”

“I want Joe (Biden) to have as much beach time as possible.  In fact, I think my articles of impeachment would free up his schedule.”

“I delivered one of my children in the front seat of my truck, because as a mom of four, we have things to do.”

Even one old gentleman who was clearly a GOP sympathizer and was outraged and indignant that SNL would take such egregious liberties in satirizing a sitting lawmaker was at a complete loss when informed that the clips were actually Boebert herself.  “So she really said that?” he asks incredulously, “Well, that’s interesting.  That almost seemed like a comedy sketch.  But not really that funny.”  Yeah, no shit, Sherlock because that kind of stupid in a U.S. Congressperson is not a laughing matter.

It’s not funny because these are the people who are helping to forge policy in this nation.  Even more disconcerting is that both of these people were elected to office AFTER they opened their mouths and spoke their special breed of stupid.  There are thousands of voters out there who heard comments like this and thought to themselves, “This woman would make an outstanding representative to the United States Congress.”  Yeah, we’re in that kind of trouble because these morons are just the signposts of further stupid to come.  In a brazen sign of where our nation now stands, they are not running away from any of these comments.  Quite the opposite- they are campaigning on them and exploiting them to drum up campaign donations.  And don’t give me the false equivalency that this kind of stupid exists on both sides of the aisle.  Both parties have always had their fair share of dumbasses, but with the election of Trump, the right has veered off the rails of the crazy train and wrecked itself in a pile of soul-crushing stupidity and ignorance, disposing of American democracy as the carnage left in its wake.  Let’s just hope we can pick ourselves up from the ashes.

3 comments on “You Can’t Fix Stupid (but you can elect it to Congress….)”