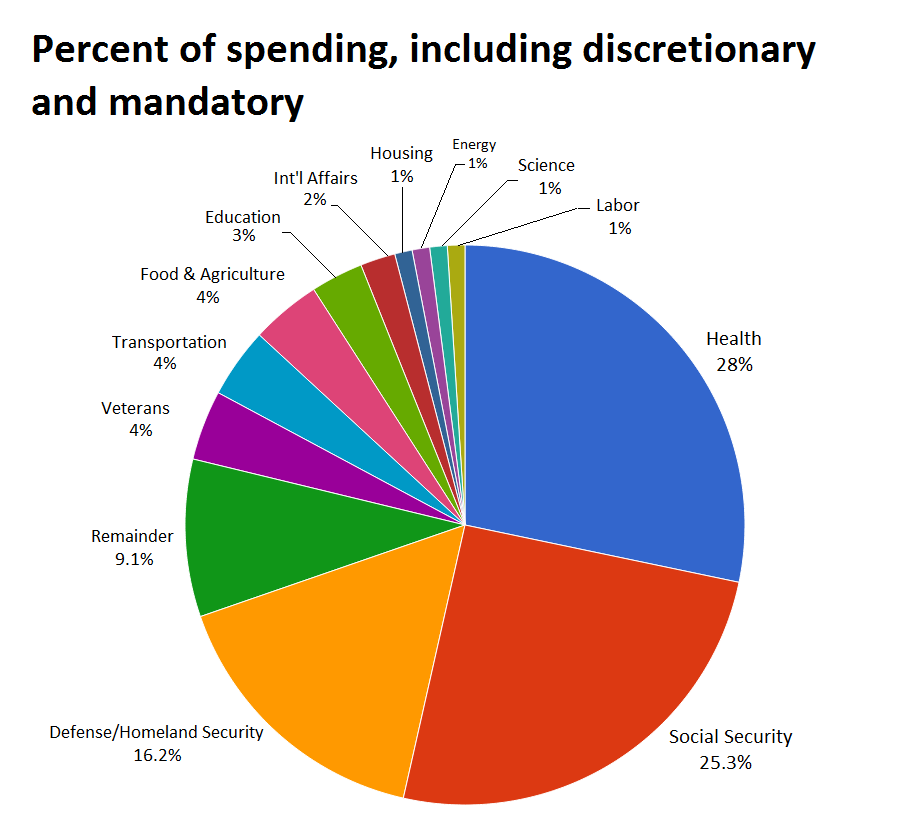 If you really want to know what a particular society values, take a look at their federal budget.  Oh, we can say we value this and value that, but in the end, it comes down to one of my mom’s favorite sayings, “Put your money where your mouth is.”  In other words, it’s all well and good to say the politically correct thing and suggest that we believe in protecting our nation’s national resources or educating the next generation of American youth, but if you really want to see where our priorities lie, follow the money.  Because if you take a glimpse at the pie chart included above, you might just come to a startling conclusion: As a country, we seem to value machines of war a whole lot more than we do people.

Groundbreaking psychologist Elisabeth Kubler-Ros once stated, “There are only two emotions: love and fear. All positive emotions come from love, all negative emotions from fear. From love flows happiness, contentment, peace, and joy. From fear comes anger, hate, anxiety and guilt. It’s true that there are only two primary emotions, love and fear. But it’s more accurate to say that there is only love or fear, for we cannot feel these two emotions together, at exactly the same time. They’re opposites. If we’re in fear, we are not in a place of love. When we’re in a place of love, we cannot be in a place of fear.”  I think it safe to say that our federal spending represents that we come more from a place of fear than we do from a place of love.

At first glance, you might point to the chart above and suggest that military spending only accounts for 16.2% of our federal budget, but consider for a moment just what that means.  Given that the federal budget stood at $3.8 trillion, we spend, on average, a bit over $600 billion annually on military spending.  That’s about 1 in every 5 dollars you sent to Uncle Sam going directly to the military.  In comparison, in 2019, we spent a combined $752 billion between federal, state, and local funding educating the 48 million elementary and secondary school children.  As you can see clearly in the charts below, we allocate almost as much funds to defense spending as the rest of the world combined, but our spending on education as compared to GDP is essentially average when compared to the 32 other OECD nations. 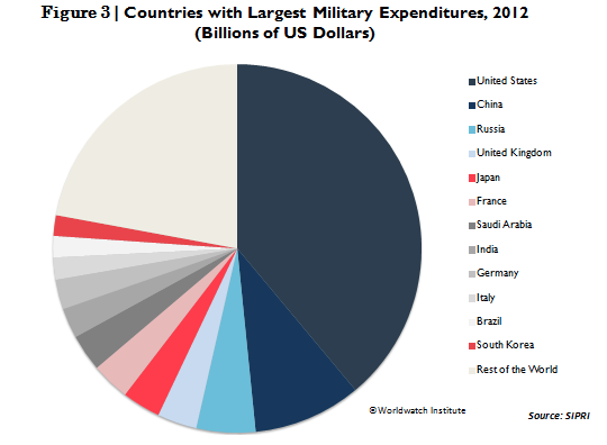 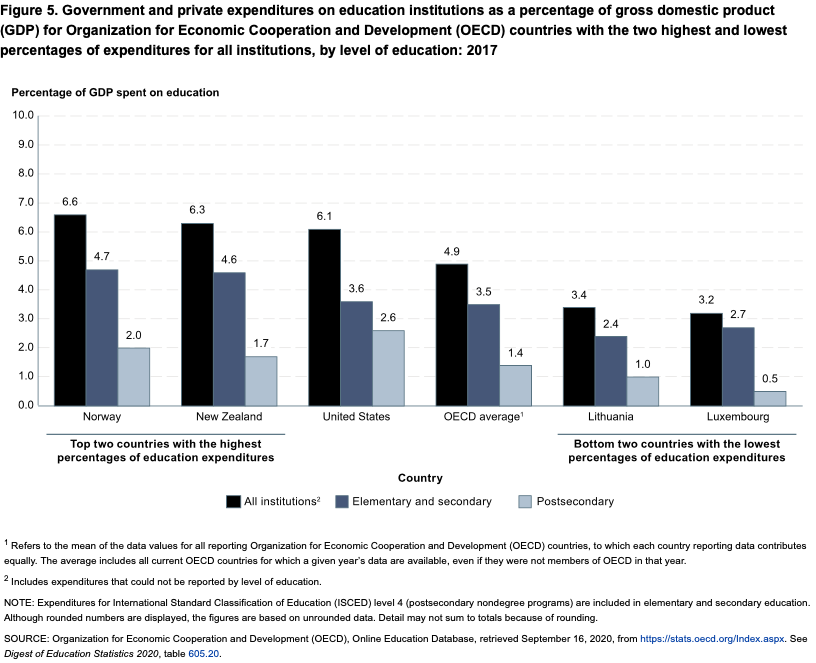 As you can deduce from this data, we spend a heck of a lot more money on defending ourselves from perceived threats than do our counterparts around the world.  By comparison, the U.K. spends approximately 5% of its federal budget on defense, Germany barely more than that.  In fact, at 3.2%, the United States spends a higher percentage of Gross Domestic Product (GDP) on the military than any other nation except for Saudi Arabia, Russia, and Israel.  I know that there are people and organizations out there that would like nothing more than to do harm to American citizens, but just what are we so afraid of?  Do we really want to spend almost as much defending ourselves from the Boogeyman of existential threats as we do on educating our children for the future that awaits them?  Do we really want to continue operating from a place of fear rather than love?

I want to be clear that I am not talking about how we financially support the fine men and women that bravely serve our country in the Armed Services.  Quite the opposite.  I have always taught my children to take the time to thank military personnel for the unbelievable job they do in protecting our freedoms every time we encounter a person in uniform.  But that gesture of thanks pales in comparison to meeting the needs these families have.  Or as my mom once again used to put it, “Put your money where your mouth is.”  Of that federal budget pictured above, only 4% goes to Veterans Affairs.  The Congressional Budget Office estimates that American taxpayers will spend $2.4 trillion on the Iraq and Afghan wars, with $39.5 billion just in defense contracts for Halliburton alone (yes, the same Halliburton run by Dick Cheney right up until the time he became Vice President).  Meanwhile, the Watson Institute estimates that it will cost approximately $2.4 trillion to care for the nearly 3 million service members that have served in post-9/11 war operations in Afghanistan and Iraq.  These brave men and women have suffered from countless physical injuries often leaving them incapacitated or disabled.  Even more, many of them returned with PTSD that has compromised their vocational opportunities, and even more so, the sanctity of their personal lives.  But in a tragic expose of our faulty priorities, the Watson Institute similarly found that, “Although the U.S. has promised care for veterans throughout their lives, the magnitude of Iraq and Afghanistan veterans’ costs is grossly understated in government projections. There is no provision set aside to cover these future obligations and thus the U.S. risks shortchanging its veterans.”

Sadly, there are plenty of folks out there, largely on the right, who would tell you that entitlements are the bane of the U.S. fiscal crisis, that helping out folks that are less fortunate is what is draining the federal budget.  But the reality is that the most bloated budget lies squarely on our adherence to continued military spending.  At this point, the Pentagon and defense contractors like Halliburton have become your drunk uncle who keep on pestering you to borrow more money you know they’ll never pay back.  But the truly tragic aspect of all this is that we continue to operate not from a place of love and wanting to help our fellow human beings in need and the children we purport to care for, but rather from a place of fear, perpetually devoting our resources to protectionism rather than growth.  The result is akin to spending all your money on a safe to secure the possessions you can no longer afford.  Instead, let’s start to put our money where our hearts are, with love for the people that truly make this nation great. 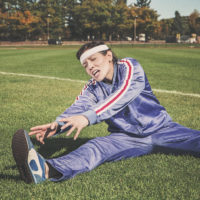 How Much Did $ Did He Make for that Free Throw??!!