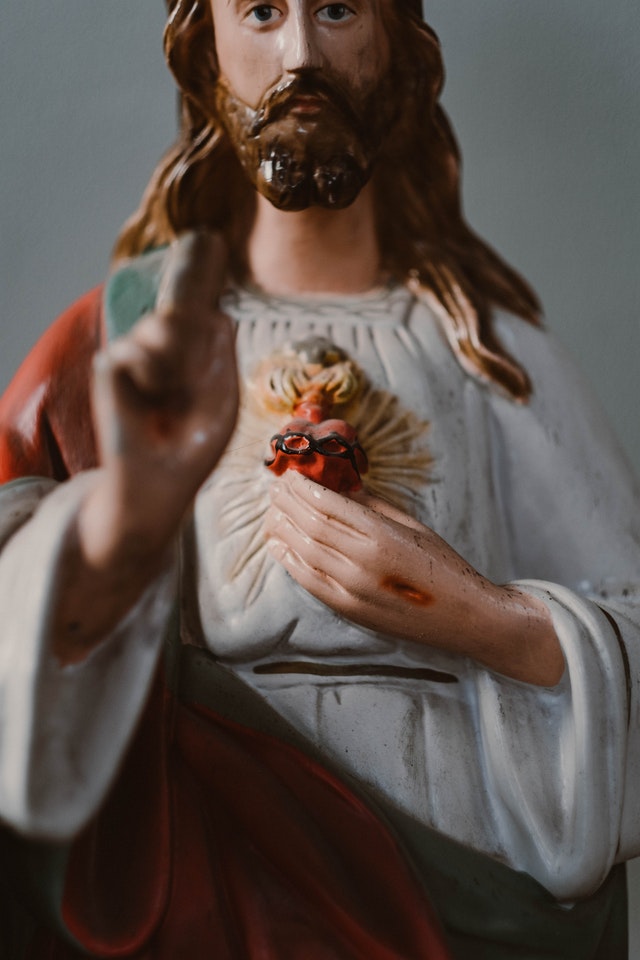 The Persuasion of the Christ

Years ago while writing for the Summit Daily, I penned a piece about one Brother Nathaniel. He’s something of a local legend in these parts, standing on various intersections throughout the county adorned in full clergical vestments, replete with liturgical cassock and hat, and waving a crucifix at passersby or gesticulating frantically but jovially at a sign he has drawn up extolling the virtues of finding Jesus as your Lord and Savior. One can only hope as they turn the corner into the adjoining parking lot that he at least has enough sense to be wearing some long underwear beneath all that regalia, but something in his wild, desperate eyes tell you that he probably isn’t.

I have often wondered just what compels him to stand out there for hours on end, straining to make eye contact with the passengers in each passing vehicle, all in the hopes of catching their attention for one brief, shining moment, a moment in which he can persuade them of a life devoted to Christ. I mean, what does he really think is going to happen? Just what power of transformation does he actually hope to wield? Does he really think that some dismissive teenager is going to suddenly roll down their window and think to themselves, “You know, I’ve never really believed in Jesus or anything, but suddenly seeing that crazy guy hanging out in the street, I’ve changed my mind. Maybe I should start going to church or something.”

Ok sure, Brother Nathaniel is clearly just some pathetic loon, roaming the streets of Summit County in a decades-long Quixotic quest to convert the heathen masses, but is he really much different from most other religious adherents? Yes, when I did research on him for the column, I came across his anti-Semitic writings with pieces like “Why the Jews killed Jesus”, but that seems relatively harmless when compared to the atrocities committed in the tradition of “persuading” others to follow a particular religion or another. History is indeed filled with wars and tortuous crusades waged in the name of religious indoctrination. Why is it then that we have such a fierce desire to compel others to join us in our faith? Why must we force others to believe as we believe?

The answer lies in two human constructs: certainty and conformity. As humans, we detest ambiguity. We prefer the safe semblance of certainty, even when it is patently erroneous. But the bigger questions of theological importance, questions like “Is there a God?”, “What happens when I die?”, “Is there a meaning to life?”, and “What makes Krispy Kreme donuts so damn delicious?”, these questions don’t have discreet, verifiable answers. Rather they dwell in the realm of ambiguity. Sure, adherents of any particular faith, including perhaps most conclusively atheism, will tell you that they have the ONE true and right response, that their path is the one true path. But anyone who has the intellectual muster to dare think for themselves knows that this is complete and utter bullshit. No one has the right answer because we inherently have only the capacity to speculate as to where the truth may lie. And as humans, that bugs the everlasting shit out of us.

And so we come to conformity. Conformity is the warm, safe blanket we clung to as a child. It gives us the illusion of security and certainty in our beliefs, when really there is none. The more others share our beliefs, the more we feel secure in the inviolable certitude of our adherence. In 1951, Solomon Asch conducted an experiment to investigate the extent to which social pressure from a majority group could affect a person to conform. Asch used a lab experiment to study conformity, wherein students participated in a ‘vision test.’ Using a line judgment task, Asch put a naive participant in a room with seven confederates/stooges. The confederates had agreed in advance what their responses would be when presented with the line task. The real participant did not know this and was led to believe that the other seven confederates/stooges were also real participants like themselves. Each person in the room had to state aloud which comparison line (A, B or C) was most like the target line. The answer was always obvious. The real participant sat at the end of the row and gave his or her answer last. In 12 of the 18 trials, the confederates intentionally gave wildly incorrect responses. On average, about one third of the participants who were placed in this situation went along and conformed with the clearly incorrect majority on the critical trials. Over the 12 critical trials, about 75% of participants conformed at least once, and only 25% of participants never conformed. When asked later why they had conformed despite the fact that their answer was clearly wrong, respondents gave two reasons: because they wanted to fit in with the group and because they believed the group was better informed than they were.

So if people are prone to intellectual conformity even in a case of easily-discernible objective truth, imagine the propensity for doing so when the answers are anything but certain. Overwhelmed by the ambiguity of theological postulations, many people simply fall in line with adopting the religious faith of their family or surrounding community. This explains the preponderance of distinct religious geographical regions of faith. In the United States, 65% of the population defines themselves as some sort of Christian, whereas 80% of India is Hindu. Rather than look for answers of our own, we adhere to the ones that are given to us. It’s just easier, and more comforting, that way. But is this really faith?

No, true faith lies in that 25% of people from the Asch study who refuse to conform whatsoever. In them lies the essence of what it truly means to have faith for they are the ones who search for their own answers, the ones that correspond with their own experience of the world and the riddles contained therein. Doing so takes the courage of embracing ambiguity, of knowing that we know nothing, but it is a courage that is well-rewarded, for it through the quest for truth that meaning begins to take shape, whatever shape that may indeed be. And when you settle into that knowledge, you will find a peace and contentment from within, rather than an unquenchable need to shout it at cars passing by.

A Spirituality of Resistance

Be sure to get the latest (third, I think) edition of this wonderful book. It’s about understanding our “embedded” theology, that which we grew up absorbing and believing,
As we grow up and grow in faith, we often realize that what we’re taught often doesn’t relate to our life. The authors, Stone and Duke are seminary professors. They do a great job writing about how we are all theologians, whether we have a bunch of letters after our names or not. That’s because we all must navigate our society, current events, and or daily life as people of faith. This is a great book for “evangelicals” and those who are “deconstructing” their faith.

https://familyproject.sfsu.edu
Several publications are available by giving your email address and zip code

Links for LGBTQ people of faith

LGBTQ Resources from The Episcopal Church

Creating an inclusive and welcoming church: