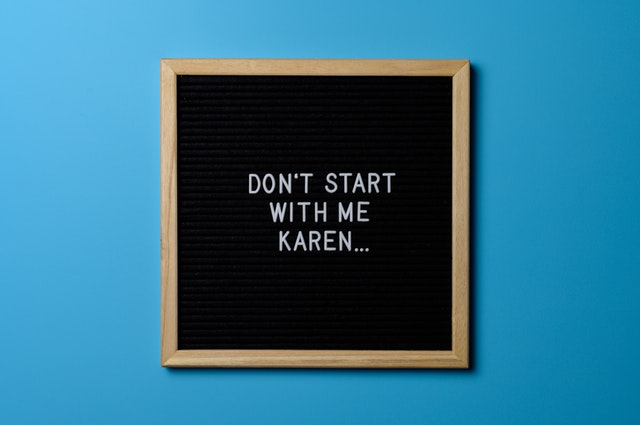 I’m going to start this week’s column by apologizing in advance to two very good friends of mine, both of whom are named Karen.  We’ve all witnessed the proliferation of memes and derogatory comments that incorporate their name as a term of mockery and derision.  Essentially, a “Karen” can best be encapsulated as construing a privileged, entitled white woman who is overly inclined to utter the phrase, “Let me talk to your manager.”  Not exactly complimentary.  And ironically enough, these two Karens of mine are anything but that description (ok- they ARE white women, but I mean the other parts).  So just why do all the Karens of the world have to get their named wrapped up with all these, well, “Karens”?  Turns out that what started as a humorous lark might just have some disconcertingly honest insights into the roles of both race and gender in modern day America.

Now I’ll be honest here- I had no flippin’ clue what a “Karen” was until the term became all the rage amongst my 7th grade students, who of course, in their typical 7th grade way, overgeneralized the term to simply mean any middle-aged white woman in the building that they didn’t like.But the use of the word “Karen” to dismissively disparage overly indulged white women has taken on a life of its own, especially in the age of COVID, where it has been applied to videos of indignantly outraged women screaming at the top of their lungs about why they do not need to wear a mask.  I mean, I don’t even really look at memes, and even I know how ubiquitous the phrase has become.

Still, the most telling case for me comes from Amy Cooper, the New York City woman who threatened to call the police on an African-American birdwatcher, Christian Cooper, who politely asked her to put her dog on a leash.  I say “telling” because Amy Cooper stands as the very embodiment of the dichotomy that defines “Karens”.  On the one hand, Amy Cooper is white, a member of the privileged class by the sheer virtue of the color of her skin.  While she may not do so consciously, she implicitly recognizes the power that that confers and knows that when she says, “I’m taking a picture and calling the cops.  I’m going to tell them there’s an African American man threatening my life,” that her white privilege will afford her the right to be heard and believed in a way that Christian Cooper would not.  And even more so, she knows that he would know that too.  Inherent to the “Karen” disposition of indignation and self-righteousness is an understanding that their voiced concerns will not fall on deaf ears due to the white entitlement they carry around like a giant bullhorn of rage.

But on the other side of that, there is also a clear sense of victimization.  Where the hell is that coming from?  The answer to that lies in the other half of the equation: gender.  We all remember that women didn’t get the right to vote until 1920, right?  I mean, I know 2020 hasn’t exactly been a banner year for celebrating uplifting events, but could we get a little acknowledgement that women only started voting one hundred years ago, for crying out loud?  That women still earn only 81.6 cents to a man’s dollar?  That the United States has yet to elect a woman to be President (though can I get a “whoop Whoop” for Kamala “Break that Glass Ceiling Down” Harris?)?  After centuries of oppression and disenfranchisement, women have a right to be pissed.

But as with many virtuous righting of wrongs, perhaps “Karens” are a sign that the pendulum has begun to swing too far the other way.  In the decades since the ERA movement of the 1970’s, women have been awoken to the imbalances of a patriarchal culture and told to push back, told to adamantly demand what is due to them.  Fortunately, this pushback has resulted in a number of triumphs that were long overdue: greater equality in college sports, narrowing the wage gap, a heightened awareness of and willingness to believe victims of sexual abuse, greater rights over their own bodies in regard to sexual reproduction, etc.  But while most women have used this struggle to demand the equal opportunities and autonomy they so rightfully deserve, “Karens” push the scope of their self-purported entitlement past the boundaries of what any reasonable human being should be afforded.  They refuse to wear masks when everyone else has to.  They demand to talk to a manager in order to escalate a minor disgruntlement into some sort of nuclear showdown that threatens the very livelihood of the poor clerk who had the temerity to not acquiesce to their unreasonable expectations.  They refuse to move over on a bike trail, even though they and their friend are taking up the entire path so that no one else can get by (ok, that one might have a bit of a personal rub in there).  In other words, they act like assholes when they really don’t need to.

A female friend of mine pointed out recently that there really is no such term for men.  What do we call men who act in over-indulged entitlement?  Well, I’m pretty sure we just call them “men”, but that misses the point, doesn’t it?  Fact is, that white men are already comfortable in their entitlement; they know they rule this shit already, so why get yourself all in a fluster trying to flout it?  A mere suggestion will do.  It is only when that white male privilege is threatened that we see them throw a hissy fit of epic proportions (or you know, an insurrection).  After all, isn’t that what the Trump presidency is all about?  White men trying to reassert what they feel is their inherent divine right that has somehow been indecorously stripped from them?

But women who share that same white privilege get labeled “Karens”, shedding a valuable light on how we continue to perceive race and gender in this country.  White women know they are afforded a certain power by their race, but it is a power that can quickly get them labeled as a “bitch” if they carry it too far, a concern white men need not worry themselves about.

Or listen to the podcast here: