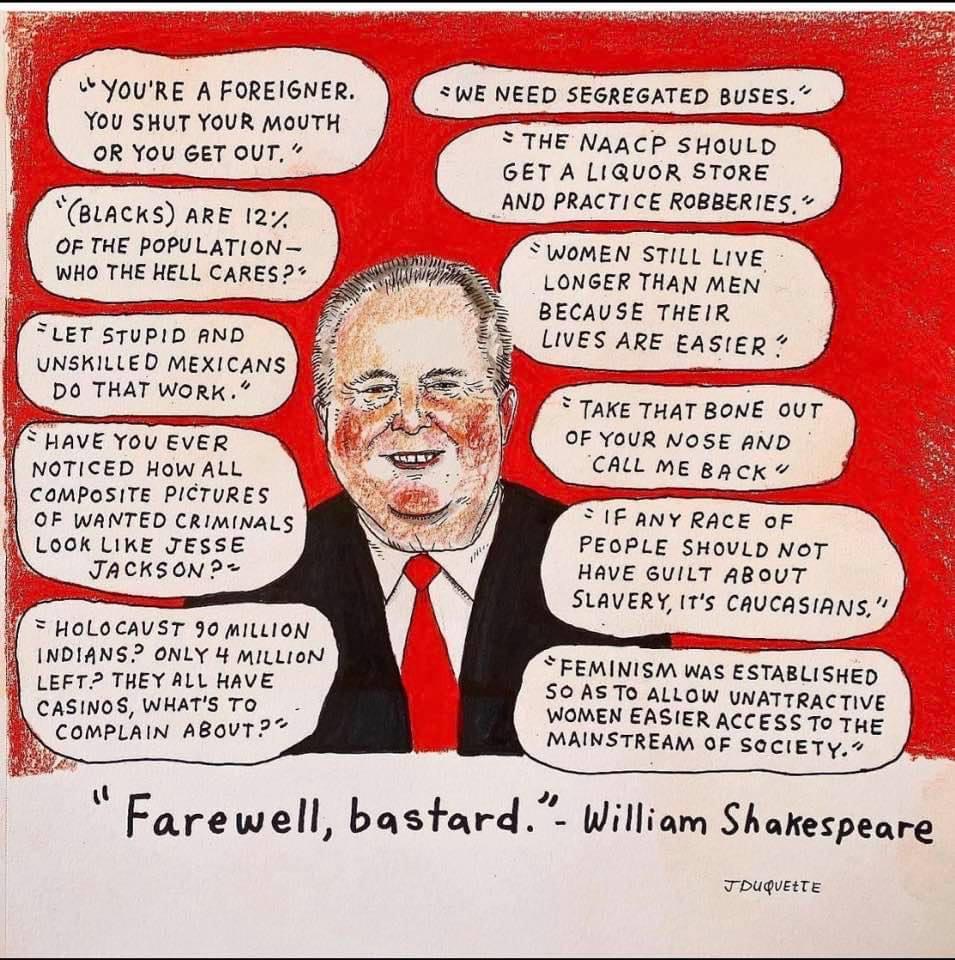 This will probably come as a shock to absolutely no-one, but I was never really a fan of Rush Limbaugh. In fact, I hated every ounce of his corpulent, self-indulged ass and felt an uncontrollable urge to punch him squarely in his rotund piehole just about every time he opened it. But when I learned of his passing yesterday, as he finally ceded to the lung cancer that had ravished his body for months now, even I, one of his staunchest critics, could not cheer. That’s just not what I’m about.

I discovered the news while aimlessly scrolling through Facebook, stumbling upon the news in a post from a friend which read, “Good riddance to one of the most awful, hateful, bigoted, and divisive humans in my lifetime.” Now, I can hardly dispute my friend’s characterization of Limbaugh as a divisive bigot. At some point or another in his long broadcasting career, this man insulted and disparaged just about every minority and special interest group outside of Focus on the Family and the NRA. But let’s take a quick gander at some of the highlights, shall we? In 1988, Limbaugh wrote (meaning he actually had time to rethink this verbal vomit before letting it come spewing out of his mouth), “Feminism was established so as to allow unattractive women access to the mainstream of society.” Before Barack Obama became president, he aired a satirical song entitled, “Barack, the Magic Negro” to explain his popularity with white voters. Or take this little gem that just smacks of a nostalgic air for Gone With the Wind-era racism, “I mean, let’s face it, we didn’t have slavery in this country for over 100 years because it was a bad thing. Quite the opposite: slavery built the South. I’m not saying we should bring it back; I’m just saying it had its merits. For one thing, the streets were safer after dark.” But don’t worry, gays, he had derogatory comments for you as well, “When a gay person turns his back on you, it is anything but an insult; it’s an invitation.” Oh don’t worry your pretty little head, Rush- gay men have much better taste than to be interested in you. So yes, I think my friend was spot-on to describe Rush as a hate-filled racist, homophobe, and misogynist. But that still doesn’t mean I’m going to celebrate his death.

It’s the first two words of my friend’s quote that get me. Oh, I understand the sentiment. Who hasn’t heard Rush Limbaugh speak and not wanted to stuff a giant MyPillow right down his gullet? But isn’t that tapping into the same anger and vitriol he preyed upon? Rush Limbaugh may have been a despicable human being, but he was a human being nonetheless, and there is a universal bond that runs through the human condition and unites us in the interconnected nature of our being. Part of that universality emanates from the shared inevitability of our demise. We too shall pass, and in that common experience, we find the brotherhood of man that should give us pause and appreciation for each and every life, no matter how big a douche someone really is. 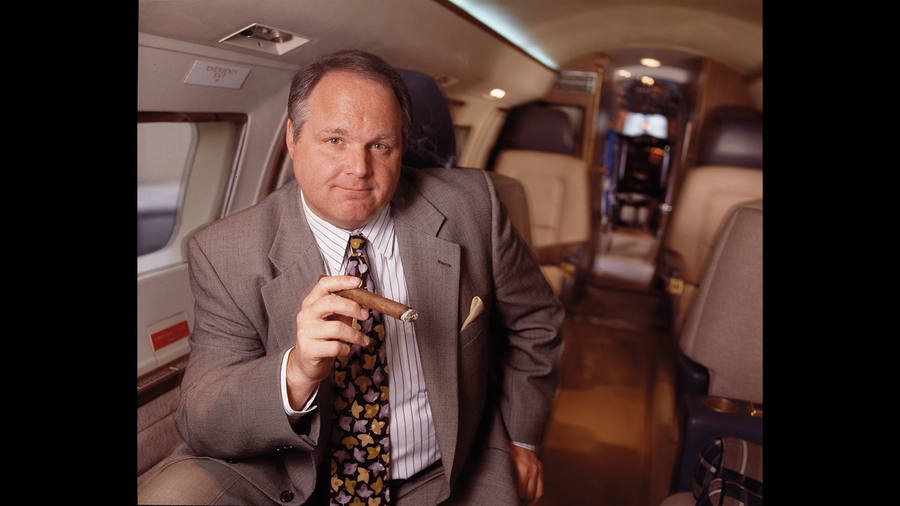 I know Rush Limbaugh pushes the boundaries of that acceptance and tests the true merits of that philosophical recognition, but it is for just someone such as Rush, as undeniably awful as many of his words and deeds towards others were, for which we need to mourn. For it is in their passing that we see reflected back to us a mirror of our own consequence. We catch a glimpse of the finite nature of this mortal coil and realize that in the end, we are all just people after all.

And I was spewing just that kind of deep, metaphysical bullcrap to another friend of mine yesterday when she called me on my own apparent hypocrisy. “Ok,” she said, “But didn’t you suggest, as recently as last November, that the world would be better off if Trump died? How is that any different?” Ok, I acknowledge that prima facie that is pretty damning on a scale of moral hypocrisy, but I swear there’s a distinction lying there between the two.

You see, just because I said the world would be a better place if Trump had died prior to the November election and spared us all the chaos, misinformation, and sedition that he perpetuated doesn’t mean that I wished for it to happen. I did not wish ill will on Trump as a human being, though the nihilistic narcissist clearly cares for no one save himself. No, despite all of Trumps lies and misdeeds, and all he did to undermine American democracy and turn this country into an autocratic regime, I didn’t want him to suffer or die; I simply wanted him to go away and rid us of his pernicious influence. If we could have shipped him off to some far away island or distant planet where he and Melania (or, if given his choice, probably Ivanka) could live out the rest of their days in peace and happiness, I would have been all for it. I didn’t need for him to die or anything, but since we all know that he wasn’t about to ride off into the sunset and not be heard from again, well, his death seemed like a better solution for humanity than the alternative.

The distinction there lies in differentiating between the person and their deeds. I hate no-one. We are all mortal creatures cut from the same cloth. But I can sure as hell hate their actions. That’s a lesson I learned from teaching: there’s no such thing as a bad kid, just good kids that do bad things. And when it comes to men like Donald Trump and Rush Limbaugh, they sure do a lot of bad things. But that’s exactly why our own happiness and self-awareness depend so directly on our ability to condemn and fight against actions of hatred and bigotry but still manage to love and embrace the humans that perpetrate them. In so doing, we acknowledge and forgive our own imperfections and recognize the basic humanity that flows through each and every soul, even Rush Limbaugh.