Santa is A Pinko Commie Fascist

One of my favorite holiday traditions is sitting back on the couch with my kids and watching the disgustingly bad yet oh so saccharinely sweet animated holiday specials from my own precious childhood.  The production quality may be something you would expect in a B-rate horror film, but I must confess here and now that I absolutely love the stuff.  It’s like eating a cake donut with frosting and sprinkles: You know from all of the artificial crap on top that this is going to do a number on your digestive system and that you will feel as dirty as a Colfax call girl after the whole experience is over, but damn does it feel good going down (as does the Colfax call girl from what I’ve been told).

Be it Rudolph, Charlie Brown, Frosty, the Grinch, or Santa Claus is Coming to Town, we love it all.  Just the other night, we settled in for Rudolph, my kids still that adorable age where they like to snuggle in for movies.  Although I now wonder how the fantastic Burl Ives got roped into lending his silky voice to this slapdash train wreck, I have been watching it every year for four decades and loved it each and every time.  That is, until the other night when my son pointed out a subtle, but seriously disconcerting, phenomenon during the closing credits.

“Daddy why did the elf just drop the bird out without an umbrella?  Isn’t that the bird that swims instead of flies?”

As the closing credits to Rudolph are scrolling by, one of Santa’s elves is shown dropping presents, including many of those found on the Island of Misfit Toys, from the back of Santa’s sleigh.  Presumably descending to the destinations of good boys and girls around the globe, he hands each of them an umbrella for safe travels.  Each of them that is but the bird, the problem being that this was the bird who had specifically iterated earlier that he was defective because he swam instead of flew.  Pushed out of the sleigh to what can only be assumed to be his untimely and bloody demise on an unsuspecting rooftop, the poor bird becomes a glaring reminder to all other toys of what happens when you fuck with Santa.

Which got me to thinking about the implied messages to young people scattered throughout this catastrophe.  First of all, we are led to believe that Rudolph is born with a congenital birth defect causing his red nose, when clearly our young reindeer friend has a raging cocaine addiction.  But be it a simple birth anomaly or a serious substance abuse issue, Rudolph is shunned not only by his friends, but by his own father who tries to hide his freakish deformity and thus avoid bringing shame down on his reindeer legacy.  So we are teaching children that this is what society does to those who are different?  Just cast them out or kill them off through late night sleigh “accidents”?  And our parents actually let us watch this shit!  Of course they did- because Rudolph, Santa and the whole lot of fictional Christmas characters are all there to perpetuate the adult parent agenda.  And just what is the adult parent agenda entail?  Making children behave.

Perhaps no better example of this exists than the seemingly innocuous holiday diddy, “Santa Claus is Coming to Town”.  A cheery tune belies the fact that this song is clearly a tool for fascist-like child indoctrination.  Don’t believe me?  Let’s do a line-by-line analysis…

“You better watch out…”  Really?  This is how the song begins, for crying out loud, with a disturbing message of ambiguous warning.  “You better not cry.  You better not pout.”  Nothing like telling young children that they are prohibited from crying, regardless of the circumstances.  Suck it up, you little pussy: Santa doesn’t tolerate whiners.  After all, “Santa Claus is coming to town”, said with one’s fist pounding into palm with the threatening tone of an implied beating.  Keep it up kid, Santa is coming to kick your little ass.

And believe it or not, it only gets worse in the second verse.  “He sees you when you’re sleeping.  He knows when you’re awake”.  Oh my God- Santa is a damn ass creeper!  He is a stalking pedophile sitting right outside your window, watching you even in the privacy of your own bedroom.  You realize people spend serious jail time for shit like this, right?  This is like letting Jerry Sandusky play Santa at the local mall just so that he can have young boys sit on his lap and tell him what they want for Christmas.  Ah, but parents hold up Santa as a paragon of saintly virtue.  Why?  Because he is the looming threat parents invoke to scare their children into “good” behavior: “He’s making a list, checking it twice, gonna find out who’s naughty or nice.”

And thus we realize why all of these characters were developed in the first place: to utilize fear to inculcate proper behavior in children during the holiday season so that parents can enjoy their libations with friends.  You know, the whole “children are to be seen and not heard” thing.  Our parents were truly twisted people.

But we’re no better.  Now we’ve invented the Elf on the Shelf who sits in our house watching over our children’s every move only to report it all to Santa every night when they go to bed.  Talk about some serious Orwellian social control!  It’s a Christmas miracle that our children don’t wake each night of December in night sweats concerned that every lapse of judgment is going to bring down the wrath of Santa.

And so Merry Christmas.  Tis the season to scare the everlasting shit out of your children.

The Purpose of a Planning Commission 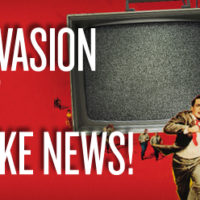 It May Not be Fake News, But It Sure Is Stupid 6 comments on “Santa is a Pinko Commie Fascist”