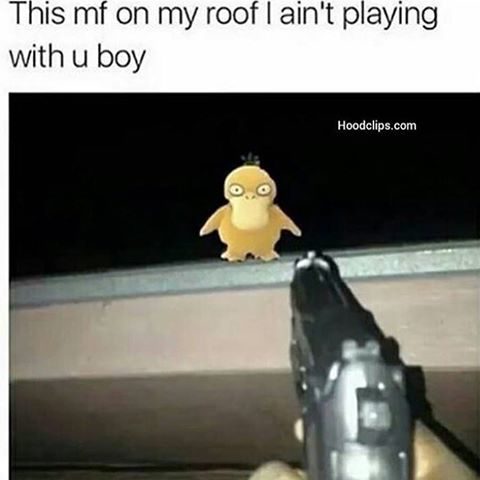 It didn’t take long.  No, this Pokemon Go craze was upon us quicker than flies buzzing greedily around a fresh pile of dog crap.  Before you knew it, there were digital creatures all around you and hordes of mindless zombies roaming the streets in search of their virtual battle and entrapment.  Suddenly, disillusioned youth could annoy you even more than you thought humanly possible as they take the literal extreme of being involved in their own worlds, oblivious to all around them, to a whole new level.

Everyone has their own disturbing story about the laughably implausible nonsense they have heard about or witnessed as a part of this phenomenon.  On my way to the airport recently, I saw signs asking people to please not Pokemon and drive, which would seem a piece of advice so patently obvious to most that you might just be willing to sacrifice any potential violators of this sound principle to the unfortunate but necessary laws of Darwinian natural selection.  The problem is that I actually saw a video on the news the next day showing a police officer having to jump for his life to avoid the nearly fatal collision brought on by a recklessly distracted driver busy playing Pokemon Go.  The one thing all of us Pokemon haters can cling to in desperate hope of the game’s hasty demise is that it seems like a giant tort lawsuit waiting to happen.  How long until someone sues because their saliva-dribbling offspring wanders like a lost sheep out into oncoming traffic?  Or what’s going to happen when some pimply-faced teen wanders onto Ted Nugent’s lawn only to get his face shot off as Ted’s natural consequence for trespassing?

Which brings us to another ridiculous facet of this whole Pokemon thing.  Multiple reports have folks traipsing aimlessly onto people’s property in the pursuit of a digital creature the property owner didn’t even know existed.  Have we really become so self-involved that we find it acceptable for the purely fictional entrapment of little virtual critters to somehow override a person’s basic right to be left alone on their own personal space?  Or has the real world become such a dreary drain on us that we have come to prioritize the fantasy perspectives we have adopted in order to escape the monotony of our daily lives?

And if this isn’t bad enough, the National Holocaust Museum in Washington D.C. actually had to request for people to not come onto the museum grounds in search of Pokemon.  Seriously?  In a world where Donald Trump can reference his own penis size in a presidential debate, I’m pretty sure people hunting for Pokemon at the Holocaust Museum is the defining moment when we know that the final vestiges of decency and decorum have just gone flying out the window.

And please don’t give me that nonsense that the bright side of all this is that at least some previously sedentary gamers have been inspired to get up and go outside.  Listen, I am all for the idea of having these pale white teenagers getting some much needed sun and exercise, but let’s face it, this is hardly the social interaction we were all hoping for.  This has not helped these people interact more with the world around them.  The fact that some of these folks actually have to be reminded to pay attention for others who might also have the audacity to exist or still adhere to basic tenants of civilized society as they track down their vaunted prey is more than signal enough that Pokemon Go might be drawing them out into the big, beautiful world around them but that they continue to be incognizant of it nonetheless.  It’s as if Nintendo merely took their favorite gamer chair and moved it outside so that the rest of us now have to deal with them instead of just their frustrated parents.  This game isn’t teaching kids where the arts district is in town or how awesome Mr. Carter, the butcher, is.  It is merely using the external environment as a highly detailed backdrop for the virtual experience they have created.  The rest of us are just imperfectly created scenery in the digital world they are hooked into.

I’m sure I sound right now like the grumpy old curmudgeon sitting out on his porch and yelling at kids to get off his lawn, but to be honest, I’m ok with that.  I am more than fine with having as much generational separation between me and this nonsense as possible.  A year from now this whole stupid thing will probably be no more than yet another passing fad in a long string of cultural nightmares.  Does anyone else remember Max Headroom, leg warmers, and feathered hair?  Yes, this too shall pass.  All these things have their moment in the sun before flaming out into an inconsequential nothingness, but I can’t help thinking that the stench of this one will linger on us like stale cigarette smoke on your favorite jean jacket.  For this fad, unlike the others, seems to say as much about us as we seem to be saying about it.