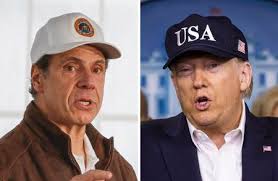 Oh, my Republican friends, don’t say that I didn’t try to warn you.  Way back in 2016 and again in 2020, I tried to caution you that if you disregarded all of Trump’s unabashed moral indiscretions and voted for that steaming pile of unprincipled dog manure that you would be forever ceding the moral high ground going forward, permanently forsaking your right to hold any future politicians accountable for their own personal transgressions.  I told you, but oh would you listen?  Nope.  You went ahead and voted for him anyway, willfully ignoring the blatant misogyny and malfeasance of a man who boastfully breached every sense of principled decency known to modern-day society.  So don’t come to me now and tell me how Governor Cuomo needs to resign, that his alleged sexual harassment of eight different accusers somehow leaves him unfit for office.  Yeah, if you indeed voted for Trump and are now flouting some false moral outrage against Cuomo, you can pleasantly shut the fuck up and take your moral hypocrisy and shove it right down your bloviating mouth hole.

By the way, I agree with you.  While I do think that Cuomo, like any individual accused of heinous acts of sexual harassment, deserves his day in court and allowed a full investigation before capitulating to the calls for his immediate resignation, if any of this proves to be true (and when eight different women are accusing you of remarkably similar crimes with astounding detail and accuracy, it almost always proves to be pretty damn true), I agree that he absolutely needs to go.  But that’s because I have standards.  I have an unwavering set of principles that I rely on for attuning my discerning judgment.  You, my Trump-loving friends, do not, and that is why you find yourself so contorted in pretzel logic that even your yoga instructor can only shake their head in utter dismay and pity.

As one of my Republican friends on Facebook pointed out, this is not about Trump.  And it’s not about Cuomo either.  I think they are both pieces of shit.  No, this, my Trump-loving friends, is about YOU, and the irredeemable and irreconcilable hypocrisy you now find yourselves mired in.  Trump and Cuomo are just the ancillary actors unmasking your inherent contradiction.  And if there is one thing I cannot stand, one thing that I always illuminate with a resounding passion, it is moral hypocrisy.  So get ready- you’re about to get owned and exposed for the weak-minded, morally-flimsy nitwits you really are.

And if that last sentence offends you as one of those Trumpers who is now calling for Cuomo’s resignation, feel free to write me and prove me wrong.  Show me how you can reconcile being perfectly ok with Trump’s misconduct but outraged by Cuomo’s, and I will be more than pleased to print it right here in next week’s TRUTH: In 1000 Words or Less.  But you know you won’t because you can’t.  In every inane online argument I have had over the past week with you folks, not one of you has addressed this basic question because you know damn well that this is simply indefensible.  Instead, here are a few of the head-scratching rejoinders I have met with over the last several days:

“Trump had sexual harassment allegations against him????”  Uh yeah, where the hell have you been?  Living under a rock?  Trapped inside a well?  Taking a nap that would make Rip Van Winkle jealous?  Oh, that’s right- you were watching Fox “News”.  I guess that is the equivalent of having your head shoved so far up your own ass that nothing factual can actually penetrate the resounding echo chamber of self-perpetuating bullshit.  That said, let me then enlighten you with the little fact that Trump has had 26, that’s right, count them, 26 separate allegations of widespread sexual harassment.  So I guess you could say the answer to your question is “yes”.

“But it’s so clear that Cuomo is guilty.”  Ok.  I’m not sure either of us has had enough time to sift through the evidence with the scrupulousness that such certainty would seem to require, but I do tend to agree with you.  Cuomo seems guilty as hell to me too.  But, seriously, Trump doesn’t?  What about 26 separate sexual harassment allegations suggests to you that all 26 of them are lying and that they should be outweighed by the 8 accusers for Governor Cuomo.  The last time I checked, 26 was a bigger number than 8.  Like, much bigger.  So what leads you to believe that Cuomo is guilty but Trump was not?  Trump’s generally upstanding moral character?  Sorry, I just blew soda out my nose laughing at that one.  Right, Trump is the guy who famously bragged about grabbing women by the pussy, hung out routinely with Jeffrey Epstein, and screwed a pornstar while his wife was pregnant with his child.  Yeah, I am sure he would never do anything like that.

“Trump specifically said that women ‘let’ him grab them by the pussy.  That implies consent.”  I should probably just let every single female reader field this one, but I think they would all agree that no woman wants to be grabbed by the pussy, especially by some guy they don’t even know.  And “letting” you do something, i.e. not daring to doing something about it because you don’t want to deal with the repercussions, is not consent, you misogynistic asshole.  Here’s a real simple way to tell if you really think that’s ok or you are just posturing in order to defend the indefensible: Would you let your daughter be randomly groped by Trump?  Yeah, I thought not, so shut up.

“Those women asked for it by going to those parties.”  Yes, I actually received that response.  In 2021.  And yes, I seriously thought about reporting them to the authorities out of a concern for their general “rapiness” (never knew I would have to invent a word for that).

The fact is that these are the incoherent ramblings I have heard perpetuating this moral hypocrisy.  But at this point, if you are still one those adherents of Trump who now want to dish out moral outrage, I no longer want to hear from you.  I have lost all respect for your thoughts or opinion.  Intelligent people develop moral standards and codes of conduct that are, well, standard, in that they are applied evenly across all individuals regardless of their political party or perspective.  If you find yourself bending those principles just because you dig the policies and political agenda of the transgressor, you are no longer an independent thinker secure in your own ideology; you are in a cult, a cult that asks you to suspend your own beliefs and fundamental precepts and instead toe the line of the regurgitated nonsense they are feeding you like guppies in a reticulating pond.  And that’s where all you Trumpers now find yourself: Either you can give up your moral outrage and waive your right to hold anyone else accountable because you voted for the utter definition of moral depravity, thus expressing3 your tacit acceptance of any outrageous conduct from elected officials, or you can stand as the ultimate in personal hypocrisy.  I’ll let you make that choice.