If you live in Colorado, you have more than likely hiked to the top of Devil’s Head Lookout, and if you haven’t, you probably should.  The iconic trek up to the last remaining fire tower in service in the state of Colorado not only provides remarkable views stretching for over 100 miles in every direction but also a snapshot into our nation’s past.  Originally established in 1912, the fire tower was rebuilt in 1951 and added to the National Register of Historic Places in 1991 as it symbolizes a bygone era wherein forest service personnel would reside at these towers and scour the local environs for signs of forest fires.  If one understands the history of our longstanding policies on forest protection, however, it also represents a keen insight into how humans, even in their earnest desire to do good for the world around them, often end up effecting disastrous consequences on the environment when they decide to try to control Mother Nature.

We all remember Woodsy the Owl and Smokey the Bear, right?  Both of these characters were staples of our youth, as they reminded us to pick up trash and prevent forest fires.  And they were right to do so.  Both of them were used to guilt trip children, and thus vicariously their parents, into limiting human impact on the natural environment of our national forests.  But what about forest fires caused by lightning or other natural causes?  Fact is that for decades National Forest Service policy did not discriminate on this basis; they established fire towers and then later aerial geographical coverage in order to discover and immediately extinguish any wildfire conflagrations.  Armed with nothing but good intentions, the forest service opted to put out any potential fire on public lands, which of course seems like a good thing, right?  But that is exactly where the problem arose.

You see, what this policy inadvertently ignores is that fire is also a vital part of the natural cycle of forest life.  When a young forest starts in Colorado, aspen trees generally take root first as they can grow quickly without intrusion from other competitors, but what eventually happens over time is that taller, denser evergreen tress encroach on the aspens and choke them out by depriving them of the sunlight these deciduous tress desperately need to provide sustenance through photosynthesis.  As the evergreen trees become older, however, they become more susceptible to fire and disease.  As such, fires started by natural causes such as lightning are a crucial part of reinvigorating the forest as they cleanse the forest of old growth evergreen trees and restart the cycle by allowing aspen trees to once again appear in a vacant landscape.  While it may be difficult for us to witness the devastation these fires wreak, it is all part of the intended processes devised by Mother Nature to maintain the delicate balance of the local ecosystem.

So what happens when humans then decide to meddle in this delicate balance?  Yeah, as you have probably already guessed by now, it isn’t good.  Those of you who have driven through the mountains of Colorado in recent years have seen the unfortunate impact of this interference of nature’s processes.  As the trees of locales like Summit and Grand county near many of the state’s largest ski areas were artificially protected from wildfire danger, they grew older and older with many of the trees dating back to the initiation of the forest service’s fire policies in the early 1900’s.  These forests were like nursing homes for trees, with many of the inhabitants sedentary and susceptible to disease.  Introduce the pine beetle, a recurring tree pest that thrives on older trees too weak to fight off the contagion, and you have everything you need for the inevitable pine beetle epidemic that has ravished Colorado forests for nearly two decades.  In the end, more than 1.5 million acres of forest in northern Colorado and southern Wyoming have been affected by the mountain pine beetle epidemic and ironically made these forests even more susceptible to fire danger as the dead trees provide ripe fuel for catastrophic wild land fires.

So just what should we do to offset this situation we have created?  Well, if we have learned anything from the mess we have made by preventing naturally occurring fires in the first place: nothing.  Stop trying to control Mother Nature and let her do her own thing.  Even when we have pure motive, we need to learn to stop injecting ourselves into the process and just let it be.

As humans, it is our innate tendency to want control over everything in our environs.  We desire to dictate to the world around us and maintain oversight over how that world interacts with us.  But that control is nothing but pure fallacy.  The outside world is going to do what it is going to do, and we are powerless to stop that, as the case of the forests forcing fire through the pine beetle epidemic seems to suggest.  The only thing we can truly control is ourselves, and that is often quite difficult for us to accept.

We want to stop aging, hold onto lovers who may be ready to go, mold our children into the exact image we have envisioned for them, and define the career opportunities that might make themselves available to us.  But while we may do our best to draw to us the things we want, we are best served to then let that go in order to accept and be grateful for the circumstances of our lives regardless of what they might entail.  For like the evergreen trees in the forest, we too are part of a delicately balanced ecosystem that spins beautifully beyond our full comprehension of its inner workings.  Much as we should have gleaned from our failed forest service fire policies of the early 20th century, it is often best to just leave that shit alone and not try to mess with elements that are beyond our control.  As Joni Mitchell once famously sang, “They paved paradise to put up a parking lot.”  Stop trying to pave your paradise.  It’s already right there in front of you. 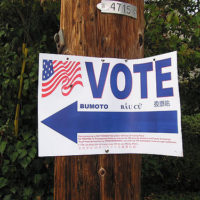 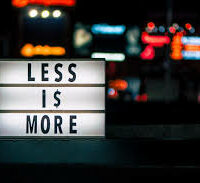