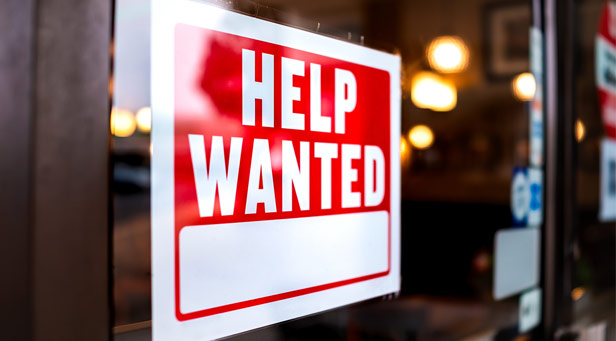 Oftentimes, life feels like one giant, swift kick to the nuts.  And then, right at the moment you pick yourself back up and shake off the agonizing pain with a series of slow, deliberate breaths and straighten yourself to full height, life comes along and plants another one right in the ‘nads.  After more than a year of having their doors shuttered by a global pandemic and hanging on by a tenuous thread of financial viability, many restaurants were chomping at the bit to finally reopen once dining regulations were rolled back and they were once again able to operate at full capacity.  Ah, but fate is a cruel, cruel mistress, and God has one hell of a sense of humor.  Despite eager crowds anxious go to out to eat and drink in public again, bars and restaurants have been thwarted from cashing in on that pent up demand by a source few people could have foreseen: worker shortages.

When national employment statistics hit their peak of 14.8% in April of 2020, with claimants numbering more than 25 million, few could have predicted the worker shortages that have predominated many parts of the United States since many retail and service-centered businesses began re-opening this past Spring.  Walk through your local urban corridor, and you will see many restaurants and bars advertising for workers, and many of these service-oriented establishments or retail sector businesses have been operating on reduced hours for months now.  These places want to be open, but they simply cannot find enough employees to fully staff their operations, and consumers, eager to get out and spend once again, are beginning to see the impact.

So just how is it that we have come to be so nationally understaffed?  Even though the national unemployment rate has fallen dramatically since the height of the pandemic, clocking in at 5.8% for the month of May, that rate is still 2.5% higher than the 3.3% unemployment rate for February 2020 right before the pandemic began.  Moreover, May 2021’s 5.8% rate is still higher than any non-pandemic month since 2014.  And yet, despite those lower unemployment numbers in the years from 2014-2020, suggesting there would have been fewer employees available for hire, we weren’t experiencing anything like the worker shortages we are currently seeing.  In other words, the workers are out there; they just aren’t taking the jobs.

A significant factor in all of this, of course, has been the extension and supplementation of unemployment benefits on both a state and federal level.  As part of the immense Covid bailout package, Biden and the Democrats sent every American a check for $1400 and lengthened unemployment benefits eligibility for people who lost their jobs during the pandemic.  This  included many folks in the service industry, who were hit hardest by the ravaging impacts of the pandemic, especially those who worked in bars and restaurants.  For months, many of these folks survived and fed their families only due to these expanded benefits.  But now those jobs are coming back and many of them aren’t so eager to go rushing back to work.  So why?

Now many of you on the conservative side of the aisle will point to these circumstances and suggest that these people are entitlement-takers, that this is just further evidence of how government unemployment programs only encourage reliance on the government rather than the self-sufficiency of a job, but I am going to contend that it is demonstrative instead of an entirely different factor altogether.  If these folks are eschewing gainful employment in favor of remaining on unemployment, this is not indicative that unemployment benefits have been made far too lucrative as Tucker Carlson would have you believe, but rather that the pay at the jobs they are being offered is just that shitty.  Before you go waving the flag of government entitlements as the problem, do you know how much the average unemployment check is?  Yeah about $320/week or about $16k/year.  How about you go try to live on that….

If you make a concerted calculation and arrive at the conclusion that you are better off not taking a job and instead living on the paltry allowances of unemployment, that is one crappy-paying job.  But that is the place we find ourselves in for failure to pass a reasonable increase in the federal minimum wage to $15/hour.  Because employees in some states are allowed to make as little as $7.25/hour, or less than $15k/year for a 40-hour work week, sitting on your ass and getting handed a check from the government that is actually slightly more than that suddenly seems like a damn good idea.  You can’t blame the workers who aren’t taking these jobs.  We have to place the blame squarely on the employers who are offering them too little.

In a recent newspaper article, I read the comments of Vail Resorts belly aching that they couldn’t find enough bus drivers at $13.50/hour and were thus “forced” to shut down a number of shuttle options for guests at their resorts.  Have you seen the cost of living in the mountains these days?  College kids are paying $1600/month in rent to live 6 to a room, so how in hell do you expect a bus driver to support a family of two?  The math just doesn’t add up, and workers are finally in a position of strength to demand a living wage.  The expanded unemployment benefits of the pandemic relief package have not only helped many Americans stay afloat during the shutdowns, they have also helped to shift the supply and demand dynamics of hiring economics and buttressed workers’ bargaining power, essentially getting from many employers what should have been granted to them by a more respectable federal minimum wage.

If you walk down to my local Target or Starbucks right now, they both have signs advertising that they are hiring at a starting wage of $16/hour.  And they both have decent benefits too.  As a response, Vail Resorts begrudgingly upped their driver pay to a whopping $13.75, but that just isn’t going to get it done, now is it?  Who is going to drive a bus of of overly-entitled tourists instead of making about $100 more per week pouring lattes and frappuccinos?  That’s just basic good ol’ American free-market, supply-side economics, baby!  But for once, it’s working for the benefit of the American worker.

Yes, this may mean increased costs for consumers, but if you have enough money to be spending on bars, restaurants or other service-industry providers, you can afford to spend a little more to allow the people who work there to have a living wage.  We are, after all, talking about people at the bottom rungs of the earnings ladder versus those with the discretionary income to spend in the service sector.  Businesses that can offer a reasonable wage to their employees and still weather the current economic environment will survive, and those that can’t, well, they won’t.  Isn’t that the very heart of free-market capitalism?  American workers have been kicked in the nuts long enough.