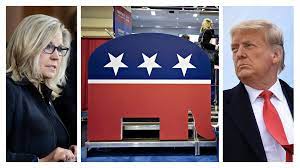 Damn you, Republicans!  Damn you for forcing me to defend Liz Cheney.  I’m talking Liz Fucking Cheney here, the same woman who voted with Donald Trump 92.9% of the time and was given a 91% rating by the Heritage Action and CPAC committees.  The same Liz Cheney who the Lugar Center ranked as the 421st least bipartisan representative in Congress.  And yes, the same Liz Cheney whose father Dick dragged the nation into the Iraq War just so that he could steer massive defense contracts towards Haliburton, the very company whom he used to run.  For years now, I have hated this woman and her entire shoot-people-in-the-face family.  But screw you, Republicans, for now making me extol her virtues for actually having the temerity to stand up to the rest of you delusions nutbags and simply proclaiming what should be patently obvious: Donald Trump is a big fat liar who lost the presidential election fair and square.

Let’s be clear: Liz Cheney is not saying anything that should be controversial.  There is absolutely zero evidence of significant voter fraud in the 2020 election, and anybody with any discerning intelligence knows that at this point.  Fox News, Newsmax, and America One have all had to air retractions in the wake of impending defamation lawsuits admitting that they misled their viewers about voter fraud.  Trump himself has had his social media accounts frozen due to his continued insistence and promoting the Big Lie, the preposterously false notion that there was any malfeasance that cost him the presidency.  The amount of sheer cognitive dissonance involved in this perpetuated fantasy tests the very boundaries of credulity.

But that doesn’t mean that the lie doesn’t have its ramifications nonetheless.  Over 70% of Republicans still do not believe that Biden is the legitimate president of the United States.  That is a wildly disconcerting number because it constitutes a significant percentage of the voting public that has their heads buried so far up Donald Trump’s ass that even Kim Jong-Un wonders at how he has engendered such mind-numbing conformity and blind allegiance.

Perhaps even more frightening is the resultant reactions from GOP lawmakers caught in the fray.  Though Republican Adam Kinzinger has suggested that only a few of his fellow Republican legislators actually believe this horseshit when discussing it in private circles, they are compelled to endorse the Big Lie in public lest they too fall victim to the political consequences of calling a spade a spade.  They have watched as Mitt Romney has been booed at the GOP convention in Utah and recognized that true or not, Trump’s blatant misinformation regarding the 2020 election plays well amongst the base, a base that more and more begins to seems entirely detached from reality or facts and is instead susceptible to farcical conspiracy theories without so much as a shred of credible evidence.  With gerrymandering creating voting districts wherein their only credible challenge for their seats emanates not from Democrats but rather from even further right wing nutters like Lauren Boebert or Marjory Taylor Greene, they have come to realize that they have to appease that base and fall in line with the Big Lie or find themselves ousted, just like Cheney.

The result is a push towards conformity and a compelled adherence that begins to look a lot more like demagoguery than actual democracy.  When members of the party are being ousted merely for having an opinion that diverges from their counterparts, what we see is not free thought, but rather idolatrous cult worship and sheer authoritarianism.  Defy thy leader and suffer the consequences.  That kind of political adherence brings us dangerously close to the teetering edge of autocracy with only a few courageous Republicans left to uphold the central values of democracy and free thought.

Ironically, of course, Republicans have spent much of the last several months bemoaning cancel culture and the woke mob silencing voices that may or may not be deemed offensive.  But the problem here is not merely that Republicans are cancelling one of their own, but rather what they are cancelling Liz Cheney for.  While Republicans are quick to defend racially insensitive or otherwise potentially offensive material in everything from Dr. Seuss to the Muppets, and to be honest, I might just agree with them, they are noticeably silent when Liz Cheney and Mitt Romney are being cancelled for daring to tell the truth.  Oh they’ll run out and get their panties in a bunch if someone dares to so much as put a disclaimer before an episode of the Muppets, but where the hell are they when a member of their own party is being ousted from a position of power just because she refuses to disseminate a patently clear falsehood?  Placed in the intellectually untenable position of defending blatant lies, all in the name of faithful allegiance to their leader, they have opted to cancel truth itself.

And so the Republican Party has devolved into two deeply divided schisms.  The first camp, divorced from all boundaries of rationality or reality, support the Big Lie and demand punishment for any dissenters in the ranks.  The other at least stands for truth, unwilling to acquiesce to the compulsion for falsehood.  But that first camp, the bunch of crazies that now seem to run the Republican Party, have splintered the party in its insistence on blind allegiance.  And so I have found myself in the undesirable position of having to actually recognize and appreciate folks like Mitt Romney and Liz Cheney simply for doing what should be a bare minimum from our elected officials: putting American democracy before their political party and their own political careers and having the guts to stand up for truth.