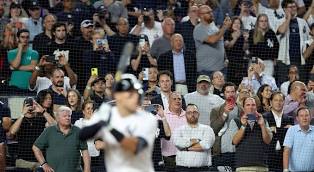 I must acknowledge here and now that I did not see this coming.  I probably don’t write three sports columns a year in TRUTH: In 1000 Words or Less, let alone three in a row, but this week we will do just that.  But sports are all about breaking records, so let’s go for it.  After all, as I sit down to write this piece on September 22, 2022, Aaron Judge of the New York Yankees is poised to do something that has only been done a few times before.

Just this past week, Aaron Judge hit his 60th home run of the season.  For those of my readers who do not know baseball, that is a lot.  Like really a lot.  In fact, only five other players have ever hit 60 home runs in a single season: Babe Ruth, Roger Maris, Mark McGuire, Sammy Sosa, and Barry Bonds.  Until 1961, that list only included Babe Ruth with 60, when Roger Maris hit 61 home runs and controversially broke the Babe’s record in the first year the season was expanded from 154 to 162 games.  Maris’s record stood for 37 years when the steroids era would usher in a home runs arms race that fueled the game but itself was fueled on banned substances and false pretenses.  Home run records were shattered faster than an Adam Levine marriage, leaving many to wonder if these substance-enhanced accomplishments should count when it came time for the record books.  So for many baseball purists, Maris’s 61 is still the true record, and Judge stands on the verge of breaking it.  And hey, we all know chicks love the long ball.

But do you know who else loves home run records- baseball fans.  Just the other night when Judge hit his 60th to match the mighty Ruth and bring himself within one home run of Maris, the ball was caught by Michael Kessler, a 20 year old college student who plays outfield for the City College of New York.  Estimates had the ball valued at anywhere between $150-500 thousand dollars.  For a baseball.  But Kessler gave the ball to Judge in exchange for a clubhouse meet-and-greet with Judge, four autographed baseballs (for him and his buddies that went with him to the game), and a signed game bat (not the one Judge used to hit the homer).  Which left many commentators openly wondering, “Man, this kid got screwed.”

Clearly, this story illustrates a telling sociological divide in how each of us perceives the moral and pragmatic implications of this decision, a lesson on modern-day American economic realities that will be delivered once again should Judge hit his 61st and 62nd home runs of the year.  Previous case law has clearly set the precedent that, in the eyes of the law, the ball, once hit into the stands, becomes the property of the immediate possessor and that they may do with it what they will, including selling it for their own financial gain.   But Kessler has suggested in subsequent interviews that he felt the ball belonged to Judge, that it was HIS accomplishment.  Certainly, the world needs more Michael Kessler’s in it- people who think of others before themselves and don’t rush to immediate self-interest.  But there’s another side to all of this that suggests he could perhaps have done more.

Many folks have come out and said that he should have turned to the Yankees officials who approached him as soon as he had his hands on the ball and told them that they could talk to his attorneys first thing in the morning, along with any other would-be buyers, to begin the bidding war on the ball.  The Yankees, and Judge, could have it- if they really wanted it and were the highest bidders.  After all, Judge can certainly afford it.  Judge is making just over $10 million this year and recently turned down a 7 year, $213 million contract in hopes of signing a much more lucrative deal in free agency.  Shoot, Judge could buy the ball with a single game check.  Meanwhile, Kessler could use that money to pay the rest of his way through college, put a down payment on a house- you know, they type of stuff Aaron Judge will never have to worry about.

What’s funny is that if you go back to the story of Maris’s record breaking home run ball in 1961, it actually sheds an interesting light on today.  That ball was caught by Sal Durante, a broke 19 year old kid, whose girlfriend Rosie actually bought him the tickets for the now-legendary game, on a loan for their double date that particular evening.  Even though the ball was worth $5 thousand at the time (approximately $50k in 2022 dollars), Durante offered the ball to Maris.  But instead Maris told him, “Keep it, kid. Put it up for auction. Somebody will pay you a lot of money for the ball. He’ll keep it for a couple of days and then give it to me.”  And that’s exactly what happened: Maris got the ball, and Durante got $5 thousand.  The ball is now enshrined in the Baseball Hall of Fame in Cooperstown.

With 14 games left on the schedule, Judge is almost certain to break the record.  And here is what I would say to whoever catches it.  Sell it.  Sure, sell it to Judge if he wants to pony up the cash for it, but sell it to some rich fuck who has enough money but not enough brains to pay you six or seven figures for a stupid baseball.  Then take that money and donate every last dime of it to whatever charity you choose.  Ok, maybe pay off your own loans first, maybe even take your partner to dinner.  But then give it all away, because the value of that ball, what made it worth thousands of times more than just any other baseball, had nothing to do with you, but the ability to use that value to make the world a better place by taking money from someone who clearly doesn’t need it and giving it to folks who really do, always was.