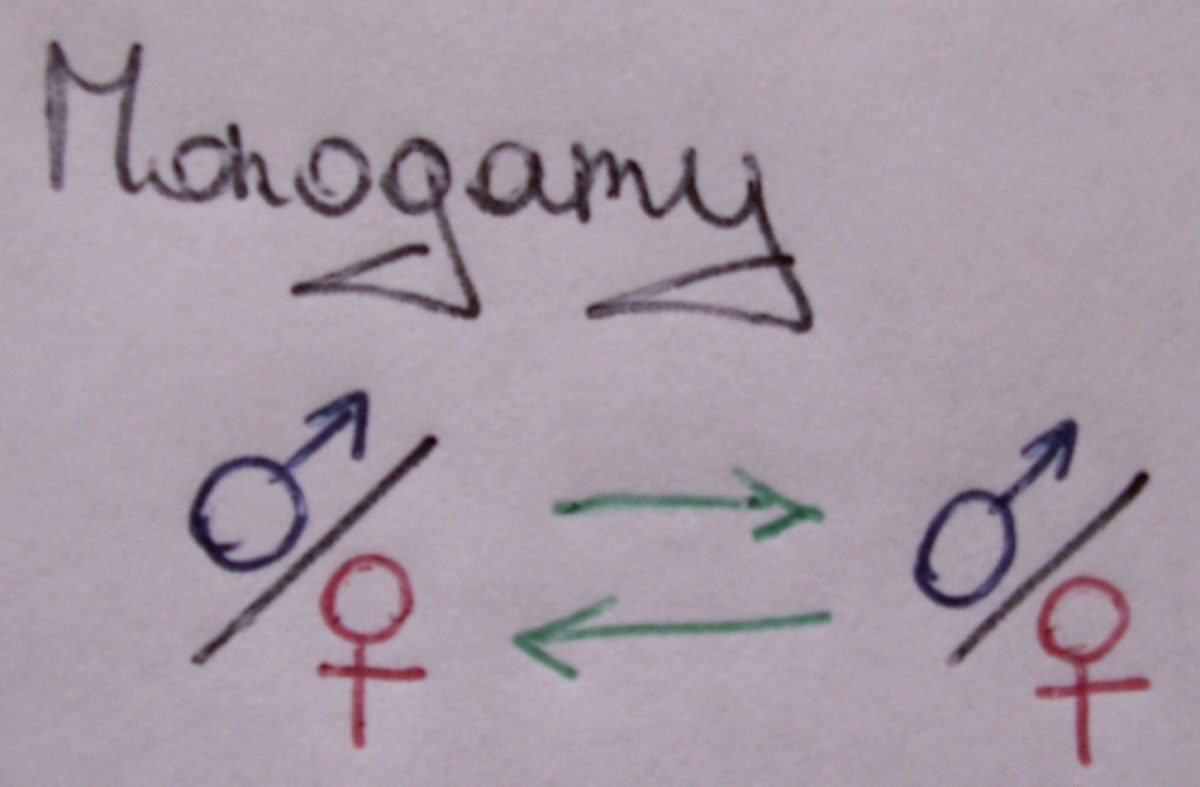 Let’s face it- fidelity and monogamy aren’t nearly as common as we might like to believe.  We all know the statistics: Half of all marriages end in divorce.  And that’s probably just because many of the others end in death before reaching the same demise.  Meanwhile researchers estimate that approximately 15-18% of partners have extra-marital affairs on their spouses.  So in other words, lots of people enter into the sacred bond of marriage only to sleep with someone else while they are married or just divorce them and get together with someone else further down the line.

Those are hardly rosy figures for the institution of marriage in the modern era.  The notion of a wedding vow representing the last time you will have another partner in your life almost seems antiquated and outdated.  We all know folks who have transgressed that line of monogamy, and the yellow pages aren’t filled with the names of divorce attorneys without a reason.  So why do we keep deluding ourselves with visions of grandeur?  Why do we keep entering into marriages only to see them dissolve or fall apart when we become disillusioned with the ones we once loved?  Are we just gluttons for punishment, or is there something still viable in the most enduring form of contract known to humankind?

The fact is that we truly are in a conflicted state as it regards marriage in our modern society.  On the one hand, there seems to be a basic need for the security and reassurance that monogamy generally offers.  We all want to feel uniquely loved, to know that there is someone out there who gives their romantic affection only to us and that we can lay our head on the pillow each evening with the comfort of knowing that we are the sole recipient of their sexual attention.  The heart and mind do funny things when we know that someone we co-habitate with frequently is in the arms of another.  Jealousy, especially when denied by our more intellectual or pragmatic self, is often an insatiable beast, preying upon our inner psyche with a torrent that is unknown in our more peaceful moments.  Oh, we can tell ourselves we don’t care, that we are not bound by the social conventions of repressive monogamy, and many couples willingly forge open arrangements under the pretense that they want to liberate themselves and their partners into relationships that allow them the freedom to express themselves sexually however they might choose.  But personally, I feel like these are always doomed from the start, ready to unravel at the very moment that human emotions come bubbling to the surface. And yet, despite our seeming psychological need for monogamy, there also remains an often equally forceful push against sameness and complacency.  Perhaps we are fueled by being desired by someone else.  Perhaps we are motivated by something our partner will not give us or the idea of something taboo.  Perhaps our partner has lapsed into a state of passionless acceptance that frustrates our burning desires.  Or perhaps the grass is just greener on the other side of that proverbial fence.  Either way, there seems to emanate from many folks a wandering eye for something outside the boundaries of their marital bond.  At some point, we begin to get bored with what we have and go looking for something else.

And trust me, I’m not here to preach at you or anything like that.  I’ll leave that to the folks who actually have a moral backbone and feel righteous enough to engage in that type of rhetorical bullcrap.  I, for one, am not going to put myself above those that make decisions they later come to regret.  Because in all honesty, way back yonder, I was there myself.  When I was still a young lad barely out of college, I cheated on an ex-girlfriend who I had been dating for a few months, and of course, being the relative dumbass I am, I got caught.  At the time, I thought it was fairly harmless, but then I saw the damage I had inflicted and I knew I would never cheat on someone again.  Not because she went right out and did it to me, which she did, but rather because I understood the painful message my infidelity had delivered to her which hers did not convey to me because it was more about revenge than sex: that I desired someone else more than I did her.  That’s a tough thing to hear from someone you truly care about, and it can only lead to questions of self-worth and adequacy.

I’ve never cheated on anyone since.  And to be honest, I am more than happy about that, for I believe that with monogamy comes another delicious variable that you just don’t get in any one night stand: trust.  What I have learned from committing myself to another is to relish the beauty of truly giving yourself openly and freely to another.  For in my experience, it is only in that sacred bond of trust and monogamy that we can really let our defenses down and become our most uninhibited selves.  We become unfettered in our desires and are free to be the romantic partner we want to and are capable of being.  And that, after all, is the essence of what real passion and fire are all about.  For me, the physical relationship only gets better as the depth of my spiritual and emotional connection with my partner is enhanced.  So if you find yourself with an air of discontent in your bedroom, don’t start looking outside it for the answer.  Delve further into the person you are already sharing it with.