Let me start my diatribe this week by taking a moment to thank all of you for taking the time to read this nonsensical drivel.  Seriously, when I go over the analytics to see how many people read TRUTH: IN 1000 WORDS or LESS each Tuesday and Friday, I am consistently amazed.  Recently, the numbers have started to grow exponentially and suggest a national, and often even international, readership for the curmudgeonly musings of a sappy English teacher turned author.  You people actually read this shit, and for that, I am eternally grateful.

As with all vocations, there are, of course, the good and the bad that go with writing down your ideas and publishing them twice a week for all the world to see.  One of the down sides, for example, is that as long as you write something with an opinion, especially one as spirited as mine tend to be, there are going to be people who think you are completely full of crap.  I get it.  That’s part of the gig, and to be fair, I write to encourage people to think- to evoke an honest and open response.  My aunt, for example, is never shy about telling me when she thinks I should move to Canada to join all those hippie communes she apparently thinks they still have up there, even though the rest of realize they went away some time shortly after the release of Easy Rider.

Some folks, however, are not so pleasant.  Yes, the internet creates a false sense of anonymity behind which cowards and douche bags tend to like to hide.  Shrouded in their cloak of namelessness, they feel completely comfortable making derogatory comments that they would never have the balls to vocalize in a face-to-face conversation.  It’s easy to be an asshole when you don’t have to own the vitriol you spew.

Call me egotistical (many of you do already anyways), but I think I understand where this is coming from.  We live in a politically correct world where we have to watch each and every little thing we say in a public forum.  Racists can no longer espouse their racist bile without feeling the sting of public backlash.  Even in Mississippi, where hating all things black and gay used to be a cultural institution like southern hospitality and NASCAR, folks can’t just go about talking prejudiced gibberish anymore.  They have to save it for behind closed doors…and internet chat rooms.

By shunning culturally disagreeable points of view, we may have created the appearance of a more socially accepting and tolerant society, but in reality, we have simply pushed their anger into a deeper, darker place.  Having sublimated points of view that preach intolerance and rage, we have told these folks they need to take their viewpoint elsewhere, to bury their opinions lest the mob that enforces political correctness use the stones of public condemnation and self-righteousness to shame them into submission.  And thus was borne the tortured marriage of suppressed furor and the anonymous platform only the internet can provide.

Last year, for example, former baseball player turned television analyst Curt Schilling had to publicly expose a young man who had made grossly inappropriate comments about his teenage daughter who was set to attend the same university as him.  I understand if you’re not a Schilling fan, be it because he played for the Red Sox or because he is a Republican, or simply because he’s outspoken.   Regardless of the reason, I don’t get it, but I don’t need to- you have the right to your opinion.  Where this internet troll crossed the line was by making it personal.  This jackass didn’t know Schilling personally, and he sure as hell didn’t know his daughter, but somehow he found it acceptable to say whatever he wanted to demean a young woman he had never met.  Basked in secrecy, the internet had somehow given him a forum to say the unthinkable.

Just because you can say something doesn’t mean you should.  Just because I can say Donald Trump is the mongrel love child of a diseased wombat and a malfunctioning fog machine from the 1980’s doesn’t mean I should because, in fairness, I have never met the man.  Even running for President shouldn’t grant folks free license for personal attacks.  As a public figure, the things he says and the ideas he espouses are fair game for criticism and ridicule (and thank you Mr. Trump for giving us such a treasure trove from which to choose), but his personal life should not be.  Leave that to Ivana Trump in her memoir.

As a writer who has the unmitigated arrogance to publish his thoughts for public consumption, my ideas are fair game.  Do what you will.  In my case, that should leave you with plenty of material to work with. 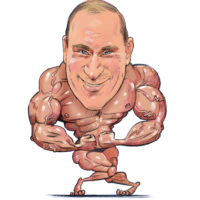