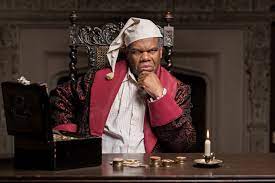 Acting is NOT Appropriation

Somehow the Christmas season just isn’t the same without some version or another of Dickens’s “A Christmas Carol”.  Call me old school (which some of you will do regardless), but there is just something about Dickens’s themes of redemption, communal brotherhood, and charitable giving that ring true with the spirit of the holiday itself.  Sure, some of that aura of benevolent goodwill towards our fellow human beings is lost in a latent anti-semitism portrayed through a miserly, contemptible Jewish businessman who has to have the everlasting snot scared out of him in order to get him to repent for his avaricious ways and embrace the more philanthropic spirit of the Christian holiday he despises, but hey, Tiny Tim does end the story by saying, “God bless us, everyone!”  In the end, I prefer to see the story on its face as a missive about the transcendent power of giving, and each year I revel in the opportunity to see it in one of its many representations.  The story has been done and re-envisioned by everyone from Patrick Stewart to the Muppets, and yet the underlying message remains the same.  The other day, I saw a commercial for the upcoming version being performed by Denver Center for the Performing Arts, and was immediately struck by a startling derivation from the original.  In this production, Tiny Tim is being portrayed by a black actor, which got me to thinking- since when has Tiny Tim, a character from Victorian England, been black?

Now don’t get me wrong- I like the idea of including some ethnic diversity in the casting of this play.  Heavens knows, Dickens could use a little color, for crying out loud.  But with claims of cultural appropriation running rampant these days, I wondered how this casting decision did not violate those same principles and rile the napes of those insisting that characters of a particular ethnic background be portrayed by actors of that same racial description.  The answer, of course, is obvious- for those who would make race a qualification in casting decisions, the direction of that discrimination flows in only one direction.

It has become vogue in Hollywood these days to criticize actors who dare to portray characters that do not meet their exact racial or personal profile, even though that would actually seem to be the very purpose and intent of what we used to call “acting”.  James Franco has come under fire from Jon Leguizamo and others for being set to portray Fidel Castro in an upcoming film.  Angelina Jolie was roundly criticized for playing Marianne Pearl.  Netflix dropped its release of the comedic musical, “The Prom” because of criticism that James Corden, a straight man, was set to play a gay character.  Shoot, Will Smith was even denounced for not being “black enough” to play the father of Venus and Serena Williams.  Tom Hanks won the Oscar for his portrayal of a gay lawyer dying of AIDS in the groundbreaking film, “Philadelphia”, but came out earlier this year and apologized for doing so, saying, “We’re beyond that now, and I don’t think people would accept the inauthenticity of a straight guy playing a gay guy.”  But wait- isn’t that the point of acting- making people accept the authenticity of a character that they themselves are not?  I know that Laurence Olivier wasn’t an ancient Danish prince, but that’s just what makes his Hamlet so compelling in the first place.

Certainly, there have been plenty of black actors portraying white characters to significant praise.  The same is true for gay actors in straight roles.  The entire premise of Hamilton is one of cultural appropriation as black and Hispanic actors take over the personas of a whole bunch of people we sure as hell know were white.  But that’s exactly what makes it brilliant.  So why doesn’t the arrow go in the other direction?

The justification for this discrepancy, of course, resides in the effort to remedy the long-standing history of cultural bias in the film industry.  For many decades, white actors were disproportionately represented in major film roles, with minority actors being relegated to supporting roles at best.  But that discrimination is simply no longer present in the modern film industry.  According to Zippia, white actors account for 59.5% of all leading roles, while black and Hispanic actors make up 13.9% and 15.6% respectively.  Those racial demographics fairly mirror the actual ethnic constituency of the country as a whole.  Meanwhile, 23% of actors are LGBTQ, approximately double their representation in the general population.  So if gay, black, and Hispanic actors are now finally being fairly represented in roles in the film industry, why is it still ok for gay, black, or Hispanic actors to portray historically white characters but not the other way around?

In the end, we should remember that acting is, well, acting, and that it should be the best actor who gets the part, not the one that fits a particular racial or personal profile.  Yes, it was absolutely necessary to atone for the errors of the past and engage in a concerted effort to better represent marginalized populations in film, but having addressed and remedied that bias, it is well past time to forgo racial profiling in film and simply allow the best actor to play the part.  That is, after all, what acting is all about- playing a character that is distinctly NOT the actor themselves.  So let Tiny Tim or Alexander Hamilton be black or Hispanic, but then also let James Franco be Fidel Castro.  And so let the film industry be the guiding light towards a more colorblind society, for therein lies the transformative power of an enterprise founded in the magical transcendence of illusion.