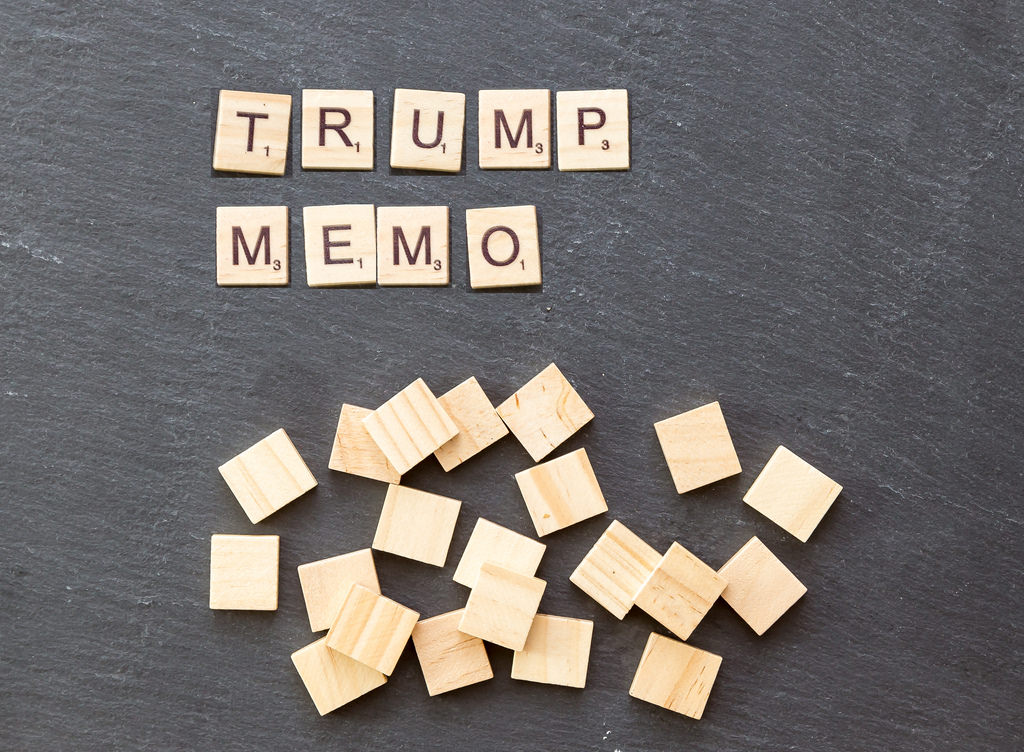 You would think that we would be used to this by now.  You would think that by this point we would would have learned that every time you think the Trump administration has hit rock bottom, they pull some ridiculous nonsense you could not have even imagined and thus set the bar even lower.  Yes, like a giant turd that sinks to the bottom of the bowl, Trump just continues to defile the presidency in unprecedented ways.

Earlier this month, Trump opted to release a Republican memo, authored by Daniel Nunez, which accuses the FBI of suppressing Democratic ties to an opposition research dossier on then-candidate Trump and Russia used in the Foreign Intelligence Surveillance Act warrant for former Trump campaign foreign policy adviser Carter Page.  This decision was made despite numerous FBI requests to refrain from doing so because the memo contained numerous factual inaccuracies and falsely painted the Bureau in a negative light.

Trump’s purpose in doing so despite these objections is clear: Trump wanted to throw shade onto the institution investigating his ties to the Russian government to see if he or his cohorts had any part to play in the Russians interference in our presidential election.  Nunez’s memo claims that the FBI investigation is wholly flawed by bias and marred by partisan politics.  It suggests that the information that led to the Foreign Intelligence Surveillance Act warrant for Page was propagated by information paid for by the Clinton campaign.  Now let’s forget for a moment that this claim does not actually negate the actual veracity of the information obtained on Page, but rather like the murderer who tries to get out of his conviction on the technicality that the search warrant that found the bloody murder weapon in his apartment was itself illegally obtained, suggests only that the dossier collected on Page was never revealed by the FBI when they applied for the warrant to investigate Page.  The only problem here is that this claim itself is patently false.

You see, the FBI did acknowledge the source of this information in a footnote of its application for the warrant.  But the Nunez memo conveniently omits this essential fact.  If Trump and his Republican colleagues had any sincere questions regarding the FBI’s handling of this investigation, they would allow the Democratic rebuttal to the GOP memo that alleged FBI abuses of its surveillance authority to be likewise declassified for the public consumption.  But of course they have not done so.  That’s because their purpose here is not to uncover the truth.  No, that’s a vain concept they did away with long ago.  Their purpose is to discredit the FBI so that when Trump is exposed for being the crook he truly is, they can question very institutions that proved it so.

And this is where we start to go down a slippery slope into some very dangerous territory.  Listen, Trump has disparaged pretty much every racial, religious, gender, and political grouping that has opposed him in some form or another.  He has attacked women, gays, transgenders, Hispanics, African-Americans, Muslims, the news media and then some, but when he goes after the investigators themselves, the institutions that are granted the political authority to unveil corruption within the government, that’s when we start treading on some new, shaky ground.  And this should be quite disettling to each and every American regardless of whom you voted for. We should have seen this coming when Trump blasted any news outlet that factually reported negative news stories about him, labeling them as “fake news” and banning them from press conferences.  The media is one of the essential checks and balances in the face of political might.  But Trump dismantled them with one fell swoop, giving his blind followers an excuse for ignoring such trivial matters as “facts” and “reporting” by questioning the news outlets themselves, falsely suggesting that these institutions which have covered both sides of the political aisle with fair scrutiny and an unbiased search for the truth were themselves somehow not to be believed.

But now Trump is taking this tactic one step further and going after the Federal Bureau of Investigations, the very organization that is trying to discern if he had a part to play in colluding with Russia to influence the outcome of the presidential election.  The immediate casualty of this hypnotic mind bending is, of course the FBI, but the long-ranging fear is that this could impact the future of the underpinnings of American democracy.

After all, the effect that Trump is aiming for is that we will, like a prize fighter contending with body blow after body blow, eventually be worn down by this questioning and resign ourselves to the political ambivalence and apathy upon which a moral coward like Trump thrives.  Knowing that the investigation can only serve to betray the crimes he has committed in order to ascend to the presidency, his last resort is to discredit the institutions themselves.  Trump has always proven that he does not care who he hurts along the way as long as he gets what he wants.  In this case, he is willing to damage our belief in American government in order to cover up his crimes and escape accountability for his misdoings.  These are the trappings of power mired in similar tactics the Nazis used to persuade an unwitting public to ignore unspeakable atrocities.  When the corrupt know they are going to be caught, they attack the institutions that are uncovering their corruption and divert the public’s attention there instead.  But we cannot allow this to happen.  We cannot be beguiled by a flimsy con artist bent on pulling the wool over our eyes.  It is not just the American president at stake here.  It is the very institutions themselves that hang in the balance.