So I was talking to an old college friend the other day, one of my regular readers- part of my legion of adoring fans who hang dotingly upon each word I write.  She hadn’t had time to read my recent column on the disconnect between American mediocrity and our continued belief in our own American exceptionalism entitled “We’re Not #1”, so I, thinking it was funny as hell, was reading it to her so that I could gauge her response.

“Well, that certainly was dark,” she said with a fatigued air.

“Really?  You think so?  I was just trying to make a point and be funny about it.”

“Was your point to depress the everlasting shit out of me?”

Well, sort of.  I mean, when did we start losing our sense of humor about everything?  Part of life is depressing there, buttercup.  You have a choice in how you handle it.  Some people deny it, burying their heads so deeply in the sand that facts cannot permeate the war bunker of optimism that they desperately cling to in their darker moments.  You can freak out and become the internet version of the creepy, bearded guy who wears the doomsday sign hanging from his neck like some sort of tragic albatross.  Or you can do what I do: laugh at that shit because it’s funny and lamenting endlessly about it will only drive you absolutely crazy.

This, my friends, is what we like to call satire.  It has been a clever tool employing humor to affect social change for many generations now, but at every step along the way, it has been demonized for being too edgy, too insulting to our sensibilities.  But good satire is effective and insightful precisely because it is edgy.  It garners criticism because there is always some artless dolt who just doesn’t get it, who feels the need to vociferously proclaim their stupidity by railing against the morality of something they do not entirely understand.

Satire has a long history of pissing people off.  One can go back to the reaction to Jonathan Swift’s A Modest Proposal to witness a misguided moral outrage to a satirical work.  An eighteenth-century humorous political piece that recommended solving the Irish poverty problem by eating Irish children sparked bitter disapproval of those who did not fully grasp the brilliance of the misanthropic Swift.  People of the time were struct by the callous tone of the piece, missing that it was just that tone that Swift was using to illustrate the heartless attitude of the British empire towards his fellow Irish.

A century later, Mark Twain would pen arguably one of the greatest, and most tragically misunderstood, novels in the American literary canon.  To this day, The Adventures of Huckleberry Finn remains a lightning rod for controversy regarding race relations, especially in the wake of a brutal history of slavery and its enduring stain on the legacy this country created.  Folks have consistently tried to have the book banned from local libraries due to its use of the “n word”, and a good friend and colleague of mine was once fired amidst a heated national debate over his use of the term in class while teaching the novel.  I get it- I don’t like that term either, but we have to understand it in the context of what Twain was trying to do.  Like any good satirist, Twain didn’t pull any punches.  He showed us our blemishes as a nation just as they were, no holds barred and no holding back, because it was in their brutal honesty, their raw exposure to the world that he could provoke us to do something about them.

Twain was a staunch abolitionist.  He was exposing slavery for the evil it truly was, but to make that point come home, he had to show it to us as it really was, and then allow us to laugh at our own discomfort with it.  When the uneducated Pap, the louse and pathetic excuse for a father that he is, comes home and rails against a black man having the right to vote, we recognize the stupidity of his beliefs, we laugh even though we know that people like Pap actually exist because it is by mocking the viewpoint that we lessen it’s power.

My favorite shows on television today are satires in this same tradition.  Like All in the Family spoke to the issues of latent racism in the 1970’s, shows like Family Guy, The Simpsons, and South Park continue to shed light on the issues of our times with humor.  For example, as juvenile as some of the potty humor can be on South Park, it often makes a brilliant statement on the role of religion in our society, and the episode with “Sexual Harassment Panda” was a thoughtful critique on the touchy subject of just what constitutes sexual harassment.  Good satire pushes our boundaries and thus forces us to confront the difficult issues of the day, all while giving us a darn good laugh.  It challenges current values and thus evokes social change by mocking a mindset of intolerance.

So don’t worry about my tone, folks.  I know my humor can be brutally honest.  My son told me the other day that my sarcasm often reminds him of Red from Angry Birds, minus the eyebrows.  Yes, I sometimes shake my head in utter exasperation of inane aspects of our world as it is, and I fire off a column drenched in crotchety old man ramblings, but I kid because I love.  And besides, what the hell else am I going to do about it? 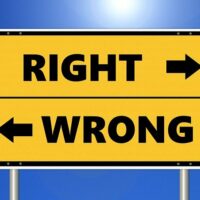